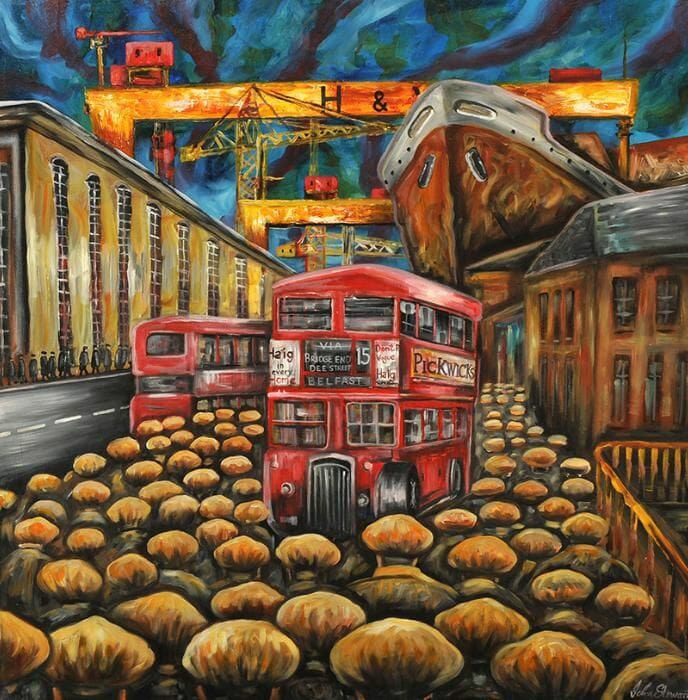 Born in Belfast 1973, John Stewart studied Art and design at Ashfield boys secondary school leaving with O and A levels in art. In 1989 He began his life as a apprentice stained glass artist at a Belfast decorative glass studio sketching painting and engraving glass. In 1995 he became a professional sign writer, as well as a mural artist, he has been commissioned numerous times with the Arts Council Northern Ireland and community groups working on projects and painting large scaled murals.
His first exhibition was staged in Belfast 2008 exhibiting his works depicting mainly Belfast industrial past displays his work province wide.
John is in his studio, researching and painting way of life when workers in early times worked in famous places like Belfast Rope work’s and local Foundries Mills as not forgetting what used to be the biggest shipyard in the world at one time.
His works reflect and looks back at history of the city. Most of John’s Art captures forgotten times and reflecting on ho life was lived in the past.
Living in the shadows of the Harland & Wolfe cranes just a stone throw away from the studio where he works daily John try’s to capture different angles day and night of the famous icons as this is one of his favourite landmarks. After years of successful exhibitions across the city John continues to keep the palate wet and successfully sells his work for and wide